GGPokerOK is one of the largest, and perhaps the most promising poker room in the world, part of the Asian GG Network. This room has replaced LotosPoker. PokerOK appeared in test mode only at the beginning of 2019, and all Lotos users joined the room. The room received its modern name, GGPokerOK, in December of the same year. Today the GG network occupies a leading position in terms of development rates. In addition to Asian players, European poker fans are actively registered in the room. Certainly the room has all the features and benefits you need to become a flagship in the GG network.

Let's start the GGPokerOK review with attendance - this is one of the main advantages of the room. Indeed, the room traffic is very large and at all limits, and it continues to grow steadily. Cash games are played at limits from NL5. Micro-stakes and low-stakes have the most traffic. So, at each of the limits from NL5 to NL50, an average of 15-20 tables are collected. A more expensive game up to NL1000 collects 5-10 tables for each limit.

A pleasant surprise awaits tournament players on the official GGPoker website. Every day the room organises hundreds of regular tournaments with big guarantees and a huge selection of buy-ins. Most of the events are held at a fairly affordable cost (up to $ 15), although there are tournaments for high rollers.

Spins are especially popular among SnG tournaments - lottery events in which the prize fund is formed in an arbitrary way before the start of the distribution (depending on the dropped multiplier). There are 8 limits in total - from $ 0.25 to $ 100. Fans of this format will be able to participate in daily leaderboards and compete for a part of the prize pool. The players who have mined the most gold fall into the prize pay zone. The fund is distributed between 8 limits.

For fans of Hold'em with a short deck, we also recommend downloading GGPokerOK. The room has a lot of games with the rules of Hold'em 6+. For players of this discipline, a daily leaderboard is also organised. The guaranteed prize pool is $ 10K.

At the beginning of 2021, an exclusive tournament format called Flip & Go appeared in GGPokerOK. According to the terms of this format, all participants automatically go all-in, regardless of the collected hands. As soon as the bubble bursts (the remaining players enter the prize zone), the game starts in the standard MTT format. Thanks to this, the duration of the tournaments is drastically reduced. Therefore, Flip & Go is very popular with recreational players who do not want to wait long hours before hitting the prizes.

GGPokerOK pays special attention to high rollers, for whom expensive tournaments are regularly held here. In this room, fans of expensive games will find events with buy-ins from $ 500. Even tournaments costing $ 25,000 or more attract quite a large number of participants.

The game client of the room was created by the well-known company Nsus International Limited, which occupies a leading position among the developers of gaming software. Thanks to flexible settings, each player will be able to customise the client in accordance with their own needs. The presence of many filters allows you to quickly find and sort the desired games by various parameters.

The lobby is dominated by black colours, against which white lettering is clearly visible. In the main lobby, all current promotions are displayed, by clicking on which you can get a closer look at the conditions of their holding. At the top of the window there are tabs corresponding to different poker formats and disciplines.

From the lobby of the cash section, you can view the available tables and waiting lists. The option to view all tables across the entire range of limits is available. Among the shortcomings, one can single out the impossibility of filtering tables by specific limits. Those. you will not be able to leave games at certain limits, so there is a chance that you accidentally register at the wrong limit.

The appearance of the table and cards can be changed. When multi-tabling, the function of setting auto-buy and the size of bets and raises will be very useful. Due to the large enough cards and clear inscriptions, the suits and values ​​of the cards are easily and quickly read when playing at several tables at the same time. If you are used to playing from mobile devices, you can download GGPokerOK to your phone for iOS and Android. The mobile version of the application is in no way inferior to the desktop one.

It is prohibited to use third-party programs to collect statistics at GGPokerOK. However, there are internal means by which some information is collected on opponents. In addition, you can mark rivals by marking them with a certain color and leaving signatures. With the help of Smart HUD, you will be able to assess your opponent's playing style.

Click on the VPIP button to view more detailed statistics. The cash will display the total number of hands played together, the number of hands won at a specific table, the last three biggest wins and losses against you. If you prefer to play AoF, you can see the percentage of your opponent's hands he is pushing with. It will also provide important insights into the player's style and allow optimal play against him.

Information and statistics about your game is collected in Poker Craft, the built-in GGPokerOK application. Here you can see your total profit and the number of played hands, the performance from each position and with specific pocket cards, the results of the game with specific opponents and other information.

Rake and rakeback at GGPokerOK

The commission rate at GGPokerOK for cash games with the rules of Omaha and Hold'em 6+ is 5%. The cap varies from 0.3BB to 3BB and depends on the limit being played. In the Rush & Cash format, 6.25% of the rake is withdrawn, but half of this commission goes to the formation of an additional prize pool, which is drawn between the participants in the game.

Thanks to the loyalty system, active players will be able to receive rakeback up to 100% at GGPokerOK. This VIP system is called Fish Buffet. After reaching each new level, you can spin the wheel of fortune and win valuable prizes.

With regular active play, the GGPokerOK loyalty system allows you to receive an average rakeback around 50%. The VIP program is divided into 8 statuses and 24 levels. To switch between them, you need to accumulate FP points.

For every cent of the generated rake, the player is awarded 1 FP point. At each level, you need to collect a certain amount of these points for a specific period of time. The higher the current level of the loyalty system, the more points you need to score to reach the next level. If you do not have time to collect the required number of points, you will remain at the same level, or decrease to the previous one. In this case, all accumulated FP points will be canceled, and 10% will be issued from their amount in the form of a cashback.

For reaching each new level, the player is given the opportunity to spin the drum with prizes. The value of the prizes depends on the current level. In the event of a cash loss, the money will be transferred to the player's account instantly. At the highest status, Shark, you can win from $ 100 to $ 1000.

GGPokerOK holds a large number of promotions aimed at both new users and regular players. The offers will be interesting not only for regulars, but also for recreational players.

All new users will be able to receive the GGPokerOK welcome bonus on their first deposit, equal to 100% of the deposited amount, up to $ 600. There is also a Honeymoon promotion for beginners, which allows you to win up to $ 150 for completing simple tasks.

A large number of jackpots are played out in GGPokerOK. For example, in the AoF format, you can win a large jackpot for collecting the strongest combination - a royal flush. A prerequisite for receiving a prize is the participation in the player's hand of both cards and the showdown at showdown. In other formats, there is a Big Hand Jackpot that allows you to win extra money for collecting strong combinations (starting from four of a kind). According to the terms of this bonus, the pot must have at least 15 BB.

Additional rakeback at GGPokerOK can be obtained by participating in various leaderboards. So, for fans of cash games with the rules of Hold'em and Omaha, races with a prize fund of $ 20K are held every day. There is a $ 10K draw for Short Deck Hold'em players. Playing in the Rush & Cash format, you can participate in the daily leaderboard with a prize pool of $ 33K. There is a race for Spin & Gold players, where every day 20 thousand dollars are played out. In the Flip & Go format, the leaderboard prize pool is $ 5K. For fans of the AoF format, there is a rake race with a huge prize pool of $ 50K.

You can find all the current promotions of the poker room on the official website of GGPoker.

GGPokerOK supports most of the popular payment systems, which makes this poker room popular among players from the CIS countries. You can make deposits and cash-outs using the following systems:

The minimum withdrawal and deposit amount is $ 10. You can withdraw up to $ 5,000 at a time. Depending on the payment system used, the cash-out will be processed within 1-5 days.

In order to avoid any difficulties when performing financial operations of GGPokerOK, you need to familiarise yourself with the features of this room:

Advantages and disadvantages of GGPokerOK

The disadvantages of GGPokerOK include the ban on the use of programs for collecting statistics. Also, some regulars note that the application is not working too fast.

The undoubted advantage of the considered room is the high traffic both in cash and in tournaments, which cannot but please poker players of any level and all limits. Thanks to the large number of promotions and the drawing of bonuses, you will be able to receive additional profits and spend your time with interest. The GGPokerOK loyalty program is also quite profitable, it allows you to receive up to 100% rakeback. It is also worth noting the rather weak field of the GG network.

To get additional benefits when signing up at GGPokerOK and take advantage of a profitable rakeback deal, please contact our managers.

❓ Why is it profitable to play in GGPokerOK room?

PokerOK is a flagman room of asian GG Network that is also oriented for Russian-speaking players.

❓ Can HUD be used on GGPokerOK?

No. According to GG Network's policy, it's forbidden to use any HUDs and statistics trackers on GGPokerOK. Violators could be banned with funds confiscation.

❓ What rakeback can I get playing on GGPokerOK?

Playing from PokerProDeals can get you up to 50% rakeback at GGPokerOK room. Contact with us via Skype or Telegram to get more deal details. 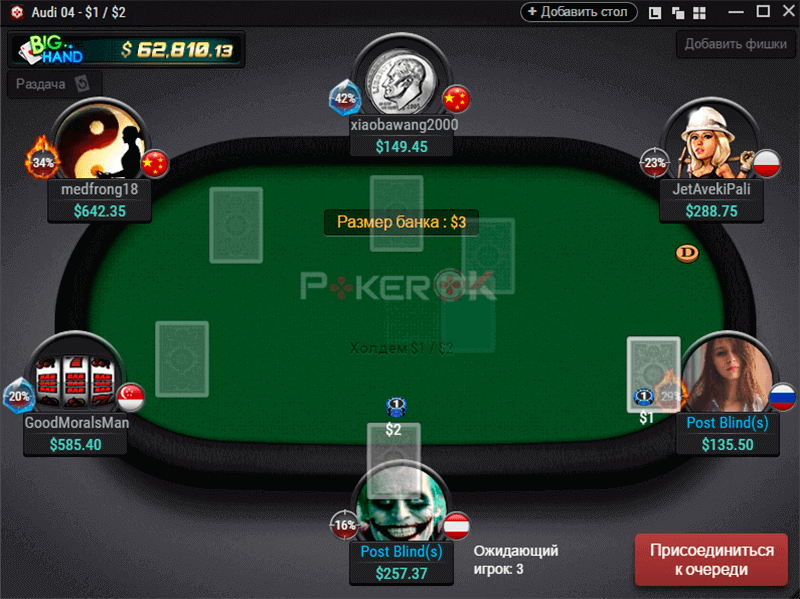 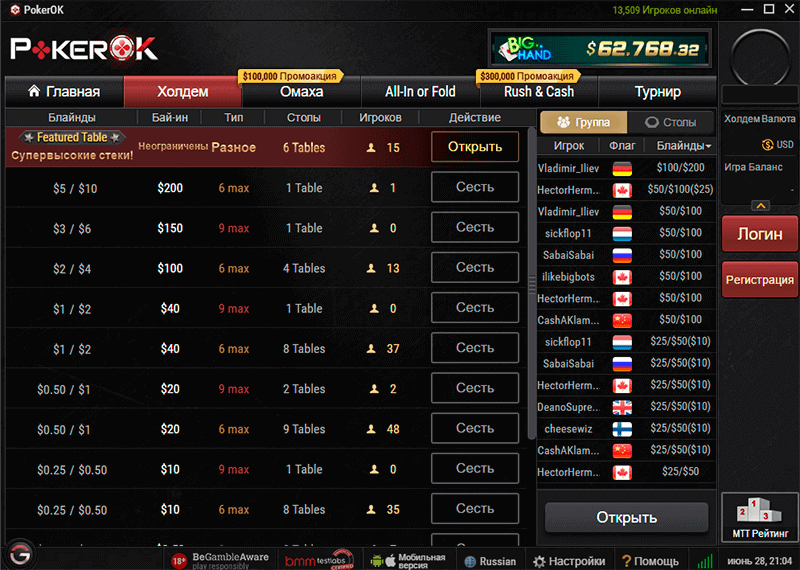 How to register in GGPokerOK?