The famous poker room PartyPoker was launched in 2001 and immediately took the leading position among the competitors. At the moment, over 30 million players are registered in this room. Over the twenty-year history of its existence, PartyPoker has established itself as a reliable poker room with an impeccable reputation.

In 2011, the brand merged with the largest bookmaker Bwin, as a result of which the Bwin.Party company was formed. The next important step in the development of PartyPoker took place in 2016. Then, for $ 1.7 billion, all shares of the brand were bought by GVC Holdings.

The room legally provides its services on the basis of a Gibraltar license. The safety and fairness of the game is guaranteed by strict adherence to all rules and regulations that are prescribed by the UK Gambling Commission.

PartyPoker has repeatedly won prestigious awards in the gambling business. For three years in a row (from 2017 to 2019), according to EGR, the room became the best poker operator, leaving even Poker Stars behind.

Traffic, formats and types of poker

At the time of this writing, PartyPoker was the 4th most visited poker room among all poker rooms (according to PokerScout statistics). At peak times, traffic can exceed 15.000 people, and during a decline in attendance, it does not drop below 5.000 connections. Most of the players prefer tournaments. About 35% of all traffic is collected at cash tables.

As in many other poker rooms, at PartyPoker the most popular disciplines are No Limit Hold’em and Pot Limit Omaha. Cash players are able to find tables with bets of 1/2 cents up to $ 100/200. Mostly they play here at 6-max tables. The popularity of the heads-up format is gradually declining. From time to time there are tables at the rates NL2K – NL2.5K.

Particularly popular in Party Poker is fast poker – Fast Poker. At some stakes, it collects even more connections than regular tables. Most of the fast poker games are concentrated on the NL10 limits – about 170-190 connections. There are 35-40 tables at the same limit in standard poker.

Although the cash traffic at PartyPoker is quite high, tournaments are definitely the strongest side of this room. It hosts a huge number of regular multi-table tournaments with large guarantees, qualifiers for live events, free-rolls, lottery tournaments and SnGs.

Every day, the room hosts about 200-300 multi-table tournaments of various formats and in a wide range of buy-ins (from 22 cents to 777 dollars). The entire tournament grid of the PartyPoker poker room can be divided into the following categories depending on the buy-in:

PartyPoker hosts major tournament series with huge guarantees every month. For example, you can take part in series such as Millions Online, PowerFest, Monster Series with a total guaranteed prize pool of up to $ 60 million. In addition, Party Poker regularly organises qualifiers for live events.

PartyPoker lottery tournaments are also present, they are called Spins. This is a hyper-turbo SnG in the 3-max format, in which the prize pool is formed depending on the dropped multiplier. The buy-in can be increased by a factor from 2 to 240.000, and the maximum prize is $ 1 million.

In 2020, there have been major updates to the PartyPoker poker client for both desktop and mobile platforms. As a result, the functionality of the applications has expanded significantly, and many new features have appeared. For example, now the tables at which poker players play under their real names, and not nicknames, are indicated by special icons. The Club Games section has appeared, with the help of which you can create closed clubs and play only with friends and acquaintances. The interface of the PartyPoker official website and applications has been translated into Russian.

PartyPoker can be downloaded to mobile devices for iOS and Android. After the update, the client for smartphones has become more convenient and functional. The tables got a portrait orientation, an updated hand player has appeared, up to 4 tables can be played simultaneously, ready-made messages are now available in the chat. Also, the developers added the Diamonds currency, which players are rewarded for completing special tasks and can spend it to buy emoji. In addition, the Rabbit option is purchased for diamonds, with which you can view the undiscovered cards of the board.

Using poker trackers and HUDs while playing at PartyPoker is strictly prohibited. However, it is possible to analyse the hands played after the end of the game. To download the hand history, you need to go to the My Game section. After that, you can upload the data to Hold’em Manager or Poker Tracker and analyse the hands. If the official site of the room does not work, use the PartyPoker mirror to access it.

PartyPoker rakeback is transparent and generous. On Mondays, players get up to 40% of the withdrawn rake back. The rakeback is calculated based on the rake generated for the previous week. The more points you collect, the more rakeback percentage you can count on. One bonus point is awarded for every dollar of rake. To get a minimum rakeback of 20%, you need to collect at least 25 points per week. For 150-500 points, 25% is returned, for 600 – 1000 points – 30%. The maximum rakeback of 40% is awarded to players who managed to collect at least 1200 bonus points in a week.

For regular players, there is a special incentive program that allows you to receive an increased rakeback (up to 60%). Players who generate from $ 100K in rake per year become members of the Diamond club and can count on 50% rakeback. If you manage to get 200K dollars of rake or more, then you will become a member of the Diamond Elite club, and you will return 60% of the commission.

It is worth noting that PartyPoker rakeback is exemplary among all popular poker rooms. The incentive system is as clear as possible – you will always know how much money you will receive at the end of the week. Active players at any limits and disciplines will be able to receive a high percentage of rakeback.

Deposits and cash-outs at PartyPoker

You can make deposits and withdrawals from your PartyPoker account with all popular payment systems. Thus, the poker room accepts payments from bank cards, Skrill and Neteller systems, WebMoney wallets, etc. The minimum deposit is $ 10. To withdraw money, you must verify your account. To do this, you need to send scans of documents confirming your identity. Verification takes about three days, so we recommend that you go through this procedure immediately after making a deposit.

The money comes in pretty quickly. When using electronic systems, cash-out is carried out within 24 hours. When transferring to a card, this procedure can take up to 7 days. As in many other rooms, PartyPoker has a rule that you can withdraw money only to the system with which the deposit was made. Therefore, before depositing your account, decide whether it will be convenient for you to withdraw your winnings in the same way.

Advantages and disadvantages of PartyPoker

If you read the reviews about PartyPoker from the regulars, you can highlight a number of disadvantages. So, more often than not, experienced poker players do not like the fact that in Party Poker you cannot use trackers and HUDs while playing. Yes, the hand history can be downloaded and uploaded after the session, however, viewing statistics during the game is not possible. Regulars also consider the lack of the ability to choose tables as a disadvantage. In addition, there are a lot of aggressive grinders at the medium and high limits at PartyPoker.

If you want to get the maximum benefits from registration at PartyPoker, including increased rakeback and additional bonuses, then contact our managers. The procedure for creating an account at Party Poker is quite simple and does not differ in any way from the same process in all other rooms.

❓ Why is it profitable to play on PartyPoker?

Playing in PartyPoker you can always find a good action game at all limits, compete with weak European players and get many bonuses, promotions and rake races.

❓ Can HUD be used on PartyPoker?

No. Since the June 2019 PartyPoker has forbidden statistics trackers usage such as Holdem Manager and PokerTracker.

❓ What rakeback can I get playing on PartyPoker?

Playing from PokerProDeals can get you up to 60% rakeback in PartyPoker room. Contact with us via Skype or Telegram to get more deal details. 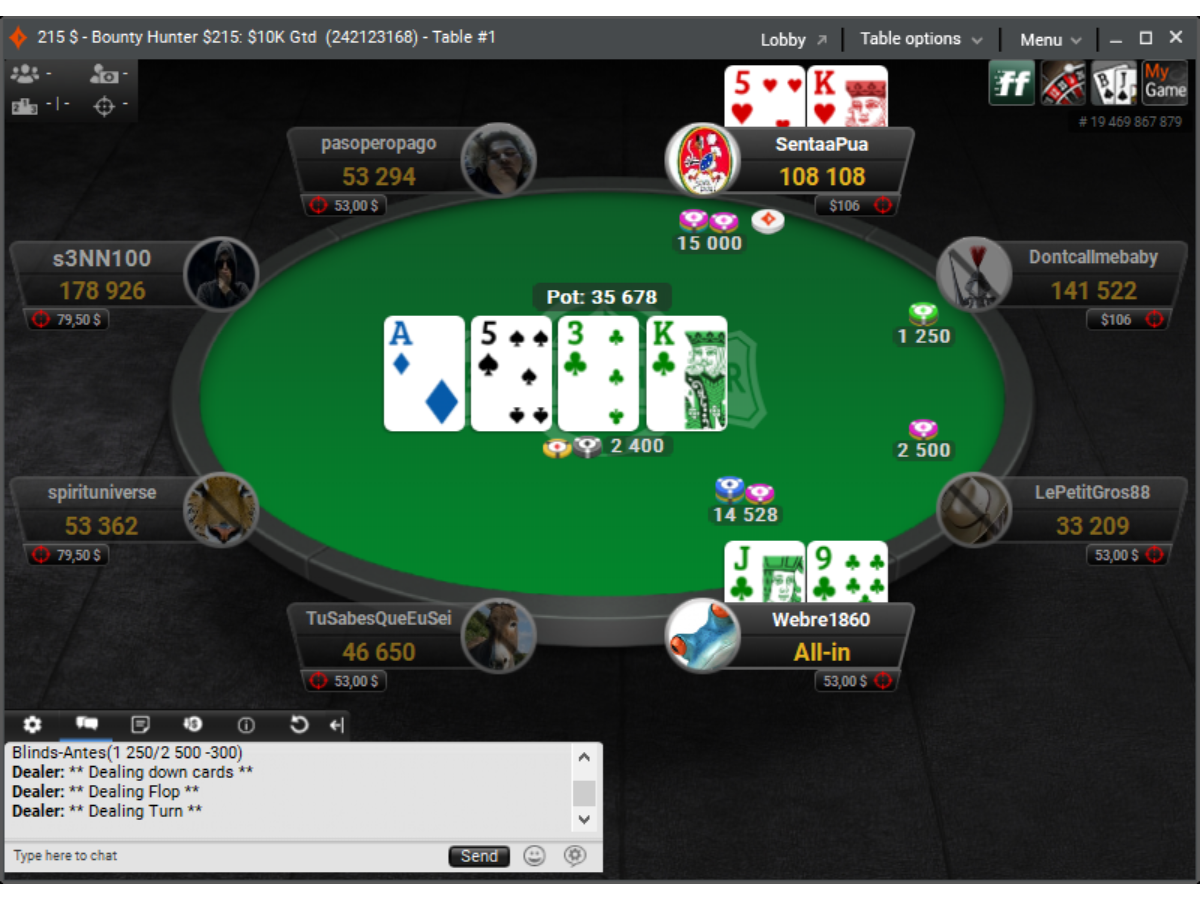 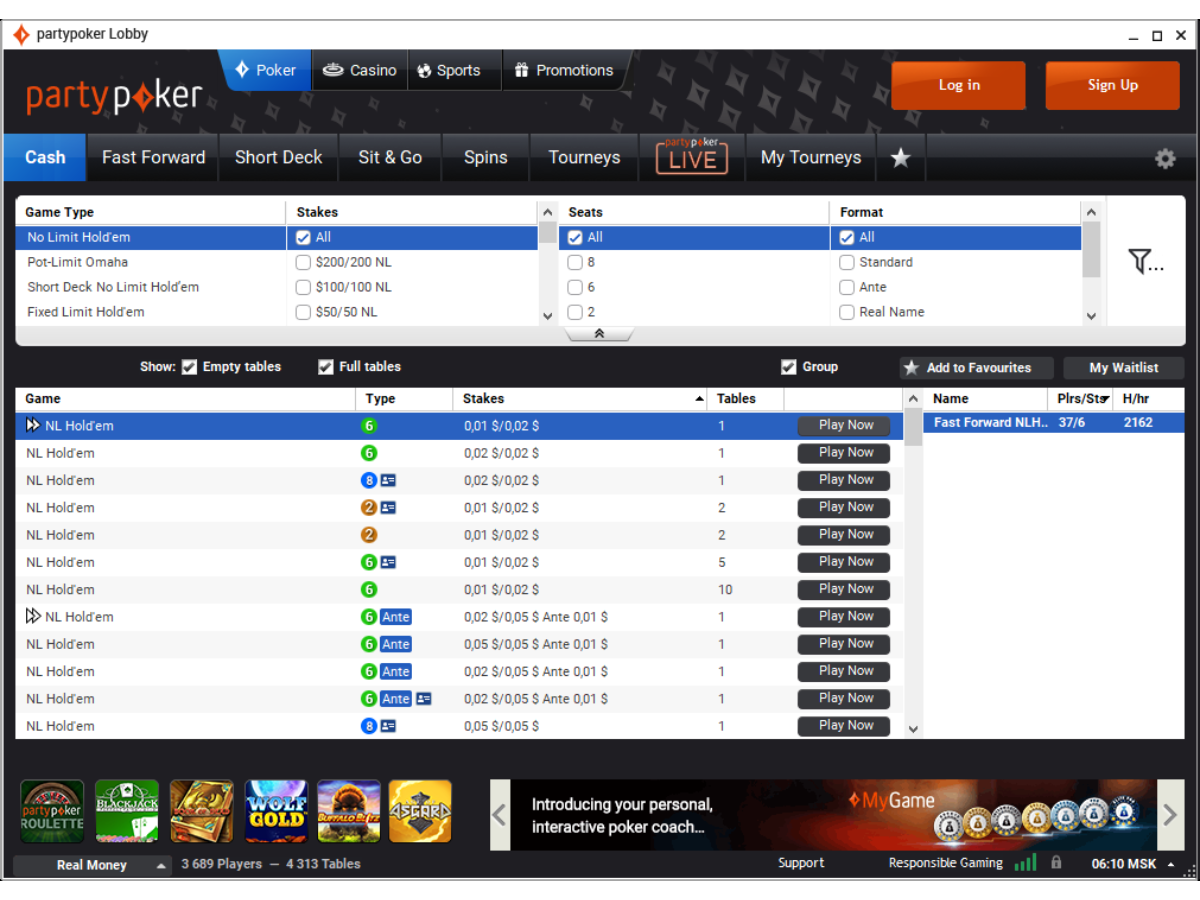