PokerKing is a large Winning Poker Network poker room that hosts American players. By registering with this poker room, you will get a rare opportunity to play against recreational poker players from the USA.

Poker King will be of interest primarily to regulars, because this room often holds promotions aimed at regular, experienced players – rake races, reload bonuses, cash and CIS races. In addition, PokerKing is a poker room with one of the highest rakeback rates reaching 65%.

WPN is the largest network for American players to register with. In terms of traffic, WPN closes the top ten most visited networks, according to the PokerScout resource. So, on average in this network, cash traffic is kept at the level of 1.1 thousand visitors per week. Prime time – morning and late night Moscow time, when it is evening in the United States.

Traditionally, most traffic is collected by cash tables with the rules of No Limit Texas Hold’em. They are played at 9-max, 6-max and heads-up tables. The CAP format (30 BB) is also presented. The cheapest game starts at 2/5 cents per blinds, and the most expensive starts at $ 25/50.

Regulars leave reviews about PokerKing as one of the few rooms with full ring tables. Therefore, if you are used to playing at 9-max tables, then this room will suit you perfectly.

Omaha at Poker King is also popular. Moreover, the room has a game with the rules of Omaha at the same limits as in Hold’em. Moreover, this type of poker is presented in several variations: pot-limit, no-limit, limit and Omaha hi-lo.

In addition to the traditional types of poker for each poker room, PokerKing also offers rarer disciplines – Stud and Fixet Limit, although there are only a few such tables here. There are mainly games at the highest limits and at rates of 5/10 dollars.

Fast poker at PokerKing is called Blitz Poker. By its principle of action, it is similar to the Zoom on Stars. The attendance of fast poker is quite large. At each of the three limits – NL10, NL50 and NL200, 80-130 people play on average. It should be noted that only Blitz can be played through the mobile version of PokerKing.

PokerKing recently experimented with the addition of a cash table format such as Bomb Pots. These tables in the lobby are marked with a kernel image. Playing at such tables, you can become a member of a special distribution that happens randomly (up to 4 times per hour) or during prize hours. All players take part in these hands at once, they make mandatory bets in 4BB or 2BB (for 9-max tables) and the game starts from the flop.

Tournament players can also download PokerKing, as WPN hosts many regular events with high guarantees. Multi-table tournaments are held with the rules of Hold’em and Omaha in 6-max, 8-max, 9-max formats, costing from 10 cents to $ 1000. A $ 3.8 million guarantee is played out every week. Of this amount, only $ 200K are played out in freeze-outs.

Before registering in the tournament, take into account the temporal features of the room – the schedule often does not coincide with the European rooms. Large series of tournaments are held periodically on the WPN. For example, the Cub3d series collects a guarantee of over $ 10 million. The most expensive and large-scale event is Venom. For example, in January 2021, almost $ 10 million was played out in this tournament, and more than $ 1.1 million was given for the first place.

Fans of SnG tournaments can also register at PokerKing. This format is still popular here, in contrast to European rooms. However, SnG tournaments have recently undergone a change, leaving only 6-max and 9-max tables in regular, turbo and hyper-turbo formats. Buy-ins start at $ 1.65 and reach $ 108.

Lottery tournaments in PokerKing are also present, they are called JackPots here. In Hold’em, such tournaments are represented by 7 limits, and in Omaha – 2. You can participate in such events for an amount from 2 to 40 dollars. In the $ 5, $ 15 and $ 50 Jackpots, the maximum prize pool reaches $ 1 million.

The PokerKing app was developed by IGsoft. You can download the client on computers with Windows and Mac OS. The lobby has a classic look, so if you have already played in other rooms, you can easily understand the interface. And novice poker players should have no problems navigating.

If you are playing from an area where online poker is prohibited, you will be able to access the site through the PokerKing mirror. After downloading the application, there is no need to use mirrors and other methods to bypass blocking.

Poker King supports the work of programs for collecting statistics and allows you to display the HUD directly during the game. The poker room has banned the use of layouts and other methods of changing graphics. Therefore, now you can use only 20 standard themes to customise the appearance of the table.

One of the unique features of PokerKing is the slot, which you can win a buy-in to a tournament at a lower cost with. There is also a lottery that makes it possible to double the winnings from the cash.

At the time of this writing, the PokerKing mobile app has not yet been developed. The release of such a client for iOS and Android devices is scheduled for the end of 2021. Now you can use the adapted version of the site to access the poker room via your phone. This version is very limited in features. So, you can only play fast poker and spins in it. In addition, many settings and filters are missing, which complicates the process of finding tables and tournaments and managing the game process.

Like most other poker rooms, PokerKing rake is 5% of the pot played in the cash. The rake is calculated depending on the money invested by each player in the pot, i.e. according to the weight contributed system. The commission is withdrawn only if the hand reaches at least the flop.

Due to the relatively high cap at PokerKing, the final rake at $ 1/2 stakes is higher than most other poker rooms. However, at NL200 limits, the commission levels out and becomes standard.

Rake in multi-table and SnG tournaments is included in the buy-in and is usually 2-10%. Spins are held with a commission of 6%.

The poker room has a loyalty program with six levels, which allows you to receive rakeback in PokerKing ranging from 12% to 65%. The first 4 levels of the VIP program are issued for a month, the last two – for a year.

For every dollar of generated rake, the player is awarded 5.5 status points (SP). These points can be exchanged for money. To do this, go to the cashier, click Rewards, then Loyalty and Points Exchange. Status points have a different rate at different levels of the loyalty program. Therefore, the higher your level, the more profitably you can change points. To reach the highest level of the loyalty system, King, you need to collect 1 million SP per year. In this case, the total rakeback will be 57-65%.

In addition to the money received for exchanging points, you can receive prizes for reaching a certain mark in the number of SPs per year. These awards can be viewed in the Achievements section.

The existing PokerKing incentive program is reminiscent of the Supernova Elite in Stars, which allows regular players to receive up to 70-75% rakeback. To do this, you need to constantly play throughout the whole year without long breaks. However, ordinary players who occasionally skate can get quite good rakeback in the range of 20-25%.

Additional profits can be gained by participating in the PokerKing rake races held at the end of the week. Cash players compete for prizes in The Beast race, while SnG players compete in the Sit & Crush race. Previously, there were 400 prizes on the leaderboard, now their number has increased to 1600, which has added motivation to non-regular poker players.

For new players, PokerKing has prepared a first deposit bonus. To take advantage of this offer, you must have a minimum top-up of $ 25. The maximum bonus size is capped at $ 2.000. The deposited amount will be doubled. For example, if you fund your account with $ 100, this amount will be credited to your main account and another $ 100 to your bonus balance. Bonus money must be wagered within 60 days after making a deposit.

During wagering, for every 27.5 status points scored, $ 1 is credited to the main balance. And it doesn’t matter what types and formats of poker you play. Considering that 5.5 SP is awarded for every dollar of rake, the welcome bonus brings an additional 20% to the rakeback.

PokerKing supports all popular payment systems. Deposit and cash-out limits depend on the system used. For example, in bitcoins, you can deposit your account with a maximum of $ 2.500, and a minimum of $ 5, the withdrawal limits are similar. When using the ecoPayz system, you can deposit no more than $ 777 at a time, and withdraw from $ 10 to $ 100K. After creating a request for a cash-out, the money will be credited to the account within three days.

It is worth noting that the commission is not charged only for the first withdrawal of funds in a month, if the withdrawal amount is not more than $ 2.500. The rest of the casho-uts will be charged a standard 5% commission. In case you made a deposit, and without using the money in the games decided to withdraw it, 3% will be retained.

Advantages and disadvantages of PokerKing

The advantages of the PokerKing room include the following:

Among the shortcomings, it is worth noting that for Europeans it will be inconvenient to peak times, falling on late night and morning. It is also worth noting that more and more regulars have appeared in PokerKing lately, which makes it difficult to find suitable tables. In addition, if you make more than one cash-out per month, you will have to pay an additional 5% commission.

PokerKing is a great poker room for regular cash game players who can get high rakeback playing against rather weak American poker players.

❓ Is it true that there are US players on PokerKing?

Yes. PokerKing is a part of WPN network, which provides an access for US players.

❓ What time is the best to play on PokerKing?

We recommend you playing from 1AM to 10 AM CET time.

❓ What rakeback can I get playing on PokerKing?

Playing from PokerProDeals can get you up to 70% rakeback in PokerKing room. Contact with us via Skype or Telegram to get more deal details.

❓ Can HUD be used on PokerKing?

Yes, on PokerKing you can use HUDs and statistics trackers such as Holdem Manager, PokerTracker or Hand2Note. 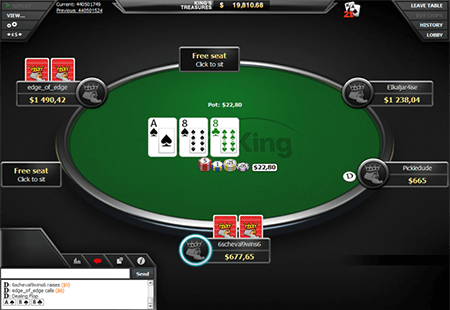 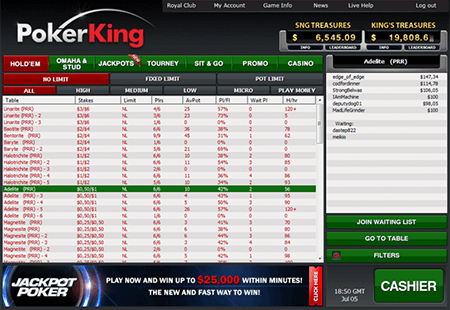