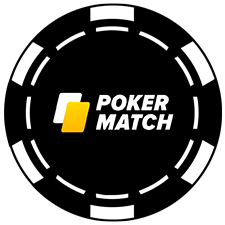 PokerMatch is a quite young, but promising poker room from Ukraine, which has gained immense popularity among players from the CIS countries. This room successfully competes with many Western online sites. PokerMatch was created in 2016 by the founders of the bookmaker PariMatch. At the time of writing this review, PokerMatch was one of the ten most visited rooms in the world and ranked first in terms of traffic among Eastern European poker rooms.

Why did poker players love PokerMatch? Firstly, for a relatively high rakeback, reaching 40%. Secondly, for a large selection of poker disciplines and formats, as well as excellent attendance. Also, this room is known for its lucrative bonuses, large tournament series and huge prize pools. But let’s talk about everything in order in our PokerMatch review.

PokerMatch gathers a fairly large audience of players. On average, the number of simultaneous connections per day is about 1000, and 60-70% of this traffic is in cash. In terms of attendance, PokerMatch is ranked 8th among the rooms available for players from Eastern European countries, and 13th in the world ranking.

PokerMatch is played only in Ukrainian hryvnia (UAH), so when reading our review on PokerMatch you should know that 1UAH = 0.03 $

In the cash section you will find a large selection of tables: with jackpots, anonymous, 6-max, 8-max, games with the rules of Omaha, Razz, Stud, Baduga, Pineapple, 32-draw, etc. Of course, rare disciplines do not collect many tables, but for the main types of poker at any limits, you will always find enough games.

Fast poker (Boost) is especially popular among PokerMatch users. This format is played with the rules of Hold’em and Omaha at 6-max tables. At the peak time, in the evening in Moscow, about 500 players play in Hold’em, and 300 in Omaha. Regular tables in Omaha are represented by several varieties of this poker: classic, 5, 6-card, high / low. The largest traffic is collected by Omaha and Hold’em tables at limits up to 5 / 10UAH (about 10-15 tables).

PokerMatch also plays Chinese Pineapple Poker. Games are held in 3-max format with a jackpot of up to 25UAH. This type of poker attracts a large number of recreational players. At peak times, about 30 tables are played.

Tournaments in PokerMatch are not as popular as cash, but they still find their fans. You can play both Omaha and Hold’em and Pineapple. Participation cost starts from 1UAH and reaches 2K UAH. Satellites are organised for the most expensive events. Regular tournaments with guaranteed prize pools up to 25K UAH are held daily. Periodically, large series are held with an increased guarantee and the Main Event, in which more than 1,000,000UAH are played out.

The SnG format is mainly represented by lottery tournaments. Buy-ins start at 5UAH and go up to 1000UAH. The maximum multiplier here is relatively small – only x100, most often the coefficients x2 and x3 will appear. The game is played in a 3-max format, the entire prize is taken by the winner, except for cases when the multiplier is x100.

The software for PokerMatch was developed by the well-known company Connective Games, which produces applications for the gambling industry. The client for the computer has a simple and intuitive interface, in the design there are black and orange colours. Even a beginner poker player can handle navigation. Just above the center is a tabbed panel, on the right side of the lobby you’ll find the Cashier section. There is also a tab for selecting tasks and bonuses. On the left side there are filters with which you can sort games by various parameters.

You can download PokerMatch to your mobile phone. The application is compatible with smartphones and tablets running iOS and Android. The poker room is also available to play from the browser without the necessity to install software. It should be noted that the browser version is not inferior in functionality to the desktop application.

Rake and rakeback at PokerMatch

The rake in PokerMatch is withdrawn according to the traditional scheme, in proportion to the contributions to the bank of the participants in the distribution. No commission is charged for hands that have not reached the flop. The rake at the tables according to the rules of Hold’em and Omaha is 5%. There is a cap, the size of which depends on the number of players and the limit. So, playing at the 1 / 2UAH limit, the maximum rake with 4 or more players in the hand will be 25UAH. In tournaments, the commission is included in the ticket price and varies between 5-10%. In Spins, the rake is 7%, and 1% of this amount goes to the formation of the jackpot.

PokerMatch rakeback consists of two parts – the return of the rake under the VIP program and payments for participating in the rake race. Every new player can count on an initial standard rakeback of 2.5%. If you play actively and win first places in the leaderboards, you can get back up to 45-50% rake. The incentive program at PokerMatch consists of 9 levels. The higher the level, the higher the rakeback percentage. To reach the maximum 9th status, you need to score 500K points, and to maintain this level – 125K points. For each 1UAH rake, 10 points are awarded.

PokerMatch bonuses allow you to get even more rakeback. All new players can receive one of the twelve available bonuses. The offer applies to the first deposit. To receive a specific bonus, you must specify the appropriate PokerMatch promo code. For example, when you deposit from 250 to 499, you should enter the code “Free250”, and when depositing an amount from 2K to 4.999 UAH, indicate the promo code “Free2000”. In this case, you will receive an instant bonus consisting of cash and tickets to Winfall, which does not need to be wagered. You can also use a wagering bonus that increases the deposit amount by 100%. So, when depositing the amount from 250 to 499UAH, you need to indicate the promotional code “First250”.

Numerous reviews of PokerMatch indicate that the majority of players choose this poker room due to the convenience of making financial transactions. Indeed, the room supports payment systems popular among players from the CIS countries, and provides quick deposits and withdrawals. At the moment, you can replenish your account or make a cash-out using bank cards Visa, WebMoney, Skrill, Neteller, AdvCash, ecoPayz.

Among the shortcomings, players note the ban on the use of poker trackers, a fairly large cap, which increases the total rake, as well as weak traffic at medium and high limits.

To summarise, we can say that PokerMatch is a reliable, high-quality room, ideal for players from Eastern European countries. We offer an exclusive deal for all those wishing to register with this poker room. For details, please contact our managers. 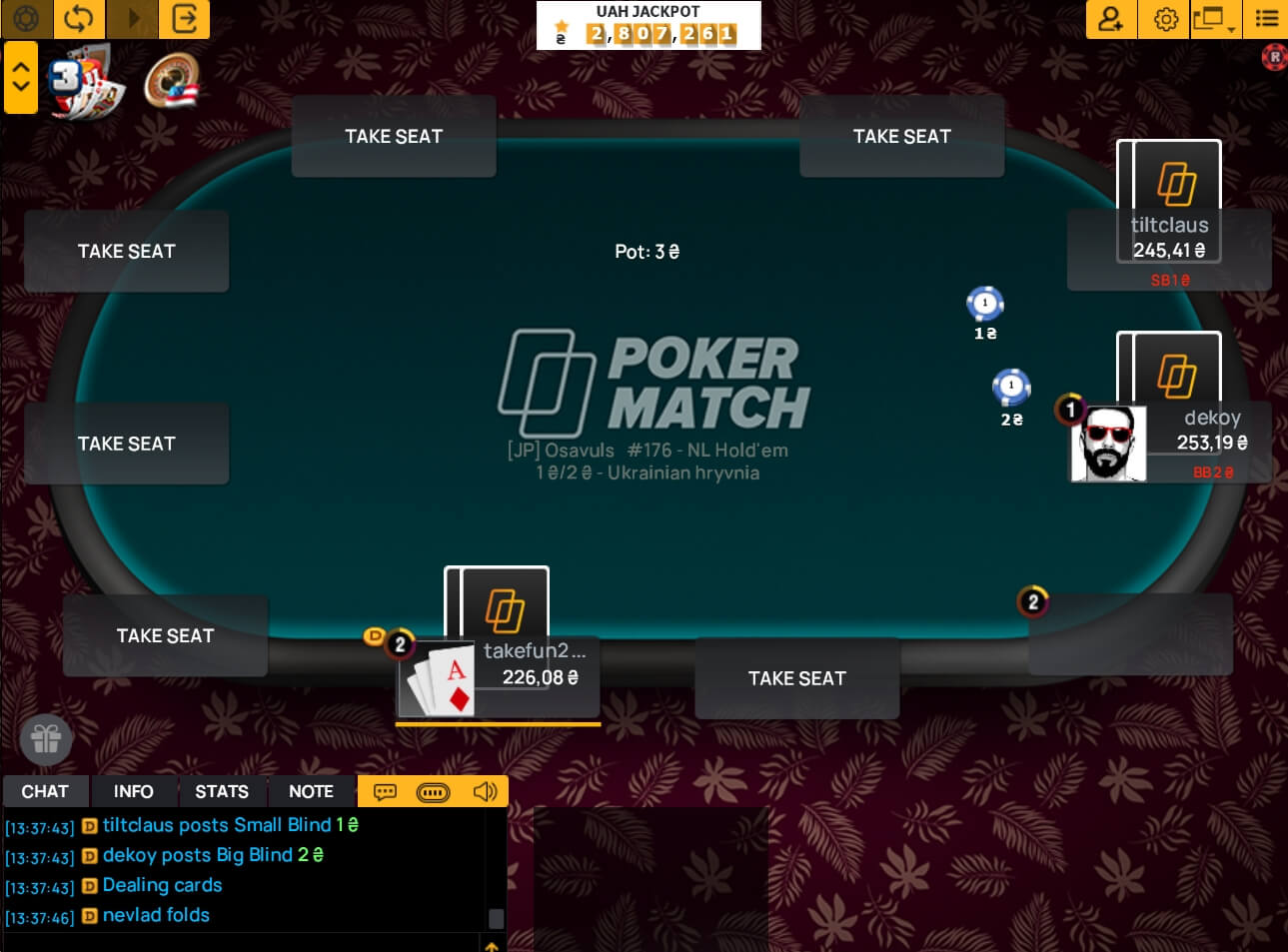 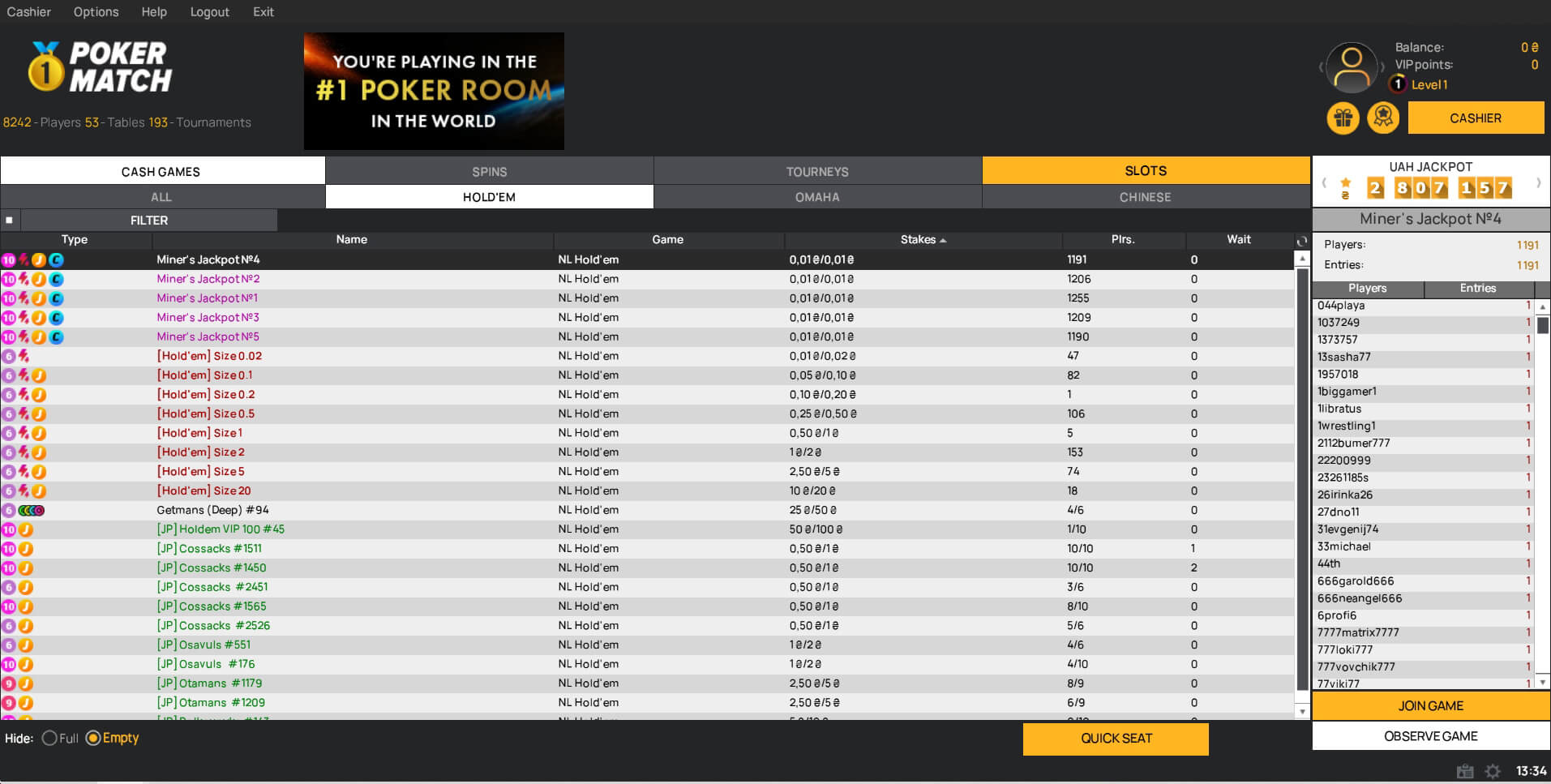